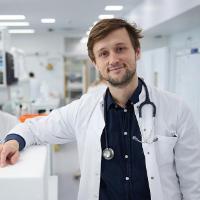 I have devoted my life to understanding the physiology of our gut, liver and pancreas with a clinical orientation towards new insight in metabolic diseases and stratified medicine. During my first three years academia, I contributed to novel measurements techniques of proteins and peptides in human and rodents e.g. the development of an ELISA for glucagon commercialized by Mercodia. This assay is now the most used for glucagon biology and has recently also implemented at Hospitals in Denmark for diagnosis of neuroendocrine tumors (glucagonomas).

During my PhD I worked closely with Matthias Mann on developing Plasma Proteomic Profiling which I have used in a series of humans’ studies with several contributions such as identification of a new glucagon-like peptide, an inflammatory panel with potential prognostic value, and finally identification of a potential new enzyme degrading several peptide hormones including the incretins. State-of the art analytical chemistry (mass-spectrometry based proteomics) has therefore been my cornerstone and have generated several seminal international collaborations each with potential clinical impact such as elaboration and application of an appetite regulatory peptide hormone together with Steven Bloom (Imperial College of London, UK) and identified new signaling path of insulin in adipocytes with Ronald Kahn (Joslin Diabetes Center, Boston, USA) with proteomics.