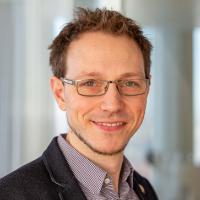 My research group investigates viral infections at the molecular level. We are fascinated by viruses, and how something so small at the border of the definition of life and with very few genes can overtake the control of the cell, the organ or the body. The medical importance of viral infections continues, with chronic infections like HIV and hepatitis viruses, a plethora of common acute infections like coronavirus, influenza, those causing serious illness like Ebola, and a growing number of vector borne viruses like dengue, chikungunya and Zika.

We are currently eight researchers in the group based on the 13th floor of the Mærsk tower at Panum. We work with around twenty others within Copenhagen Hepatitis C Program (CO-HEP) and are affiliated with Department of Immunology and Microbiology, University of Copenhagen as well as Department of Infectious Diseases, Hvidovre Hospital.

Our research interest is focused on the molecular and cellular biology of viral infections. Only through establishing detailed functional knowledge on the virus and its interaction with the host can we learn how to prevent and treat infectious disease. With a background in hepatitis C virus (HCV), it has been exciting to follow how 25 years of basic research have paved the way for novel therapies currently coming to the clinic (Scheel and Rice, 2013 Nat Med). In particular, we are interested in the molecular biology of RNA viruses and their interplay with host RNA (Damas, Fossat, Scheel, 2019 non-coding RNA). Previous and ongoing projects include the interactions between viruses and miRNAs or other cellular RNAs, miRNA systems biology, functional and therapeutic studies of HCV, molecular evolution of RNA viruses, development of in vivo infectious clones and cell culture systems for cultivation of viruses, RNA virus recombination and novel animal homolog viruses of HCV.

A central research focus is RNA viruses, and how these interact with cellular RNA during infection. The exciting overlapping field of cellular non-coding RNA and virology allows for application of state-of-the art systems biology techniques in the context of viral infection. Systems virology is of particular interest to broadly identify phenomena that would be missed using reductionist approaches. Combined with classical virology and cell biology methods, we are able to follow up on findings to validate and functionally understand findings.

We previously used such approaches to study micro-RNA (miRNA) interactions during viral infection. Hepatitis C virus (HCV) has been known as a unique example of a virus that critically requires a cellular miRNA through binding of the liver-specific miR-122 to the viral 5’ UTR. This interaction was previously shown to enhance viral translation, RNA stability and replication. Using cross-linking and immunoprecipitation (CLIP) of the argonaute (AGO) protein, which directly binds the miRNA and its target, we directly confirmed this interaction and further demonstrated that HCV infection functionally sequesters miR-122 (Luna et al., 2015 Cell). This “sponge” effect of the tumor suppressor, miR-122, leads to de-repression of cellular miR-122 targets – an RNA based mechanism potentially contributing to a fertile environment for liver cancer.

A limitation of AGO-CLIP methods is the lack of experimental pairing between identified targets and the bound miRNA. Identification of miRNA-target pairs therefore relies on bioinformatic predictions. Through method optimization, we developed ways to experimentally ligate the two, thereby unambiguously identifying miRNAs and their cognate targets (Moore et al., 2015 Nat Comm). The resulting data set generated a map of miRNA interactions in mouse brain and human liver cells. In a follow-up study in the cow, we generated the so far most comprehensive binding map approaching saturation (Scheel et al., 2017 Sci Rep).

With methods in hand to identify unknown miRNA interactions, we asked the question whether HCV/miR-122 is a unique case? We therefore screened 15 different viral infections, and found very different miRNA binding profiles to viral RNA (Scheel et al., 2016 Cell Host Micr). The vector borne alphaviruses, like Sindbis and chikungunya, replicate to very high levels, and correspondently also bound high levels of cellular AGO/miRNA complexes. However, a broad range of miRNAs was bound and there was no specific AGO/miRNA sequestration. On the other hand pestiviruses, important animal pathogens leading to significant loss in the meat and milk industries, specifically bound members of the cellular miR-17 family to their 3’ UTRs. Unlike the canonical action of miRNAs down-regulating mRNAs, miR-17 binding stimulated pestiviral RNA replication. Similarly to HCV, miRNA binding was found to be critical for viral replication. We further found that pestiviral infection specifically sequestered miR-17, leading to functional de-repression of cellular genes. Thus, HCV/miR-122 is not a unique case, rather pestiviruses also require binding of a cellular miRNA. We continue studies to functionally understand miRNA requirements for hepaci- and pestiviruses (Yu et al., 2017 PLoS Pathogens). Other ongoing projects focus on RNA-RNA interactions more broadly during viral infections, using methods relying on direct RNA-RNA cross-linking.

Another research focus is animal homolog viruses of HCV. Since its discovery in 1989, the origin of HCV has been a mystery and solid reports of related endemic viruses lacking. In 2011, collaborators discovered the first non-primate hepacivirus (NPHV). We have studied these viruses subsequently found in horses and rodents, and contributed to their initial characterization (Kapoor et al., 2013 mBio; Kapoor et al., 2013 JVI). Through construction of a full-length infectious NPHV clone, we demonstrated the genetic make up and course of infection after intrahepatic injection into a horse (Scheel et al., 2015 PNAS). In ongoing collaborative studies, we continue work to understand hepaci- pegi- and parvoviruses in horses in vivo. Our lab focuses on the molecular biology of these studies.

The rodent hepacivirus is very promising as a small animal model for HCV. No current immune-competent animal model for HCV exists, hampering vaccine development. We, together with Amit Kapoor, Nationwide Children’s Hospital, Ohio, characterized rat hepacivirus (RHV), the infection of which was studied in lab rats (Trivedi et al., 2017 Hepatology). We also, together with Charles Rice’ laboratory at The Rockefeller University adapted RHV to lab mice, providing an even more accessible surrogate model for HCV (Billerbeck et al., 2017 Science). Our group is currently continuing work with these viruses, including their miRNA dependency, tropism, pathogenesis and establishment of in vitro systems (Wolfisberg et al., 2019 J Virol).